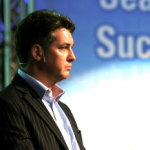 A veteran of sixteen years in the Australian online marketing industry, Barry Smyth is a highly regarded thought leader both here in Australia and overseas.

He has been involved with online marketing since 1997 after a very successful sales and management career in the media world, predominantly in the Airport Advertising world where was the 2IC of Australia’s biggest airport ad concessionaire at the time, Australian Airport Advertising.

Barry spent a period of time at Fairfax Media helping put together content deals with other newspapers in New Zealand and South Africa to form what is now knows as rugbyheavan.com.au.

He also worked on three or four other sports-related sites before moving into the world of Ad Serving for many years with Sabela Media, a business that was bought by the NASDAQ listed 247 Media in 1999.

Barry’s involvement in search marketing began in 2002 when the founders of Sabela Media joined forces with a small SEO shop called Decide Interactive after the sale of Sabela Media.
Together they built a business that eventually became the largest search marketing company in Australia, the jewel in the crown of Decide was our paid search technology called Decide DNA, a bid management systems that helped us run some extremely successful campaigns, in 2004 the business was sold to the Nasdaq-listed 247 Real Media.

In July of 2006 Barry left to pursue the dream of starting a business of my own that eventually became what is now known as No Drama Media, a search marketing training company that is now a division of Bower Interactive. This new venture was a training business specialising in the education of search engine marketing through our workshop series called Search Engine Boot-Camp.

No Drama Media is responsible for programming content and running Australia’s largest search marketing conference – Search Marketing Summit – SMS Sydney, we continue to run this event once a year in April or May.

Through SMS Sydney Barry has set the standard for the rest of the search marketing industry to follow, we train the industry and are at the bleeding edge of search.

Born in Belfast Northern Ireland, Founder Barry Smyth’s family travelled to Australia in the early 1970′s as Ten Pound Tourists, much like Tony Abbot’s. However, the Smyth’s flew here rather than coming by boat!

Barry has since lived most of his life on the Northern Beaches of Sydney for most of his life and having gone to school in Manly his path followed what many consider a natural pathway, joining many of his peers at Manly Life Saving Club as well as playing Rugby locally with Seaforth Raiders as a junior and Manly Marlins Rugby Club, undoubtedly he considers himself a Manly boy.